When you have a creative outlet, it’s very easy to become inspired without realising it. Whether you are an artist, actor/actress, film editor, baker… you’re constantly feeding off those around you who enjoy indulging in similar fields. Copying is far too harsh of a word for my liking in this case. There’s a difference between simply gaining inspiration and down right duplication.

In my case, my creative outlet is fashion and expression through clothes and accessories. Sometimes I am oblivious as to when I am inspired by ones aesthetic, other times I’m pretty conscious of it. I have to admit I have never been a wild film fanatic; if you ask me whether I have seen a film that’s regarded as widely popular, chances are I haven’t seen it… I deem myself pretty selective when it comes to films. That or my attention span just wasn’t very good that day…

Anyhow, I thoroughly enjoy admiring the aesthetic of cinematography through the outfit choices, scenery, the soundtrack… the whole package. I studied Media Studies in college and it’s pretty much the reason I didn’t end up dropping out. I loved analysing films, music videos etc. If you haven’t already caught on, I am a big fan of visual expression.

So I thought I’d ramble about my favourite film styles and themes. It’s very hard to pick a favourite – each one is brilliant in their own unique way. Here’s just a few of them…

What better way to start than with John Hughes’ 80s classic The Breakfast Club? I absolutely adore this film. When I first watched it, I must admit that I didn’t expect it to be as considerably slow paced as it was (at the beginning to middle, anyway). But I personally think that’s what makes it so brilliant. Detention isn’t meant to be exciting – and through the monotonous mood each character expresses, you pay more attention to the variety of styles and characteristics presented in each attendee of Saturday detention.

It speaks to all teenagers everywhere; more or less everyone going through the struggles of puberty and high school have their mind made up about one thing – the world is against them.

I found the contrast between each character to be so striking. The elegant pink blouse Claire sports clashing with Bender’s flannel shirt, along with Andrew’s Nike vest sitting on his athletic stature combined with Allison’s hunched posture dressed in black head to toe. I imagine there’s a teenager or maybe even adult out there who relates to at least one of these characters, if not all…

Finished with the iconic and perfect Simple Minds’ ‘Don’t You Forget About Me’, this film remains as one of my favourites to date.

It’s pretty safe to say that Miss Roberts was a crucial asset to hit films back in the early 80s through to the 90s. Not too long ago I finally sat and watched the film I was constantly skipping past on Netflix – Mystic Pizza. And I’m so glad I did. Roberts’ effortless yet elegant appearance gave me deja vu all the way through… but what or who did she remind me of?

Oh, yes… Lana Del Rey from her video for her song ‘Ride’. I swear the two could be twins.

Her wild mane of hair and costume choices are what enchanted me while watching this film, along with her carefree spirit and the way she rocked the classic vintage aviator jacket. Plus, she reassured me that waitresses (like me) can be badasses too…

And of course I can’t discredit Pretty Woman. My boyfriend introduced this film to me only a few months ago (like I said, haven’t seen a great deal of films…) and I was hooked from the word go. The decor of the hotel room, along with the transformation from the blonde wig to her natural head of hair and once again effortless class shining through whenever she sported a new outfit made it a very aesthetically pleasing cinematic masterpiece to say the least. 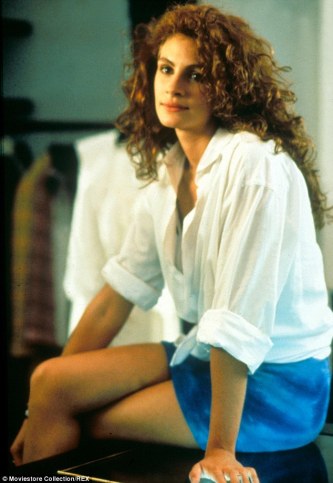 One of my favourite vintage trends is a classic white shirt tied up at the bottom, and here Roberts is portraying that perfectly. Plus, the polka dot get-up gives me major Audrey Hepburn vibes.

Pulp Fiction is most definitely up there on the list of favourite films. Quentin Tarantino can never fail to please the eyes of his viewers through his aesthetic selections. His casting is always perfect, and Uma Thurman portraying Mia Wallace here is the epitome of that.

Although she isn’t in the film for a huge amount of time, I still stress that she is my favourite asset of Pulp Fiction. I adore her styling of such a minimalistic outfit… it may end up covered in blood in the end, but you win some you lose some, I guess…

Mrs Wallace also possesses something I envy: the ability to rock a short cut fringe. If I so much get mine cut the slightest bit too short I basically go into meltdown.

My favourite scene apart from the adrenaline shot scene (purely because it was filmed backwards and I think that’s so unbelievably cool) is the diner scene. The red lighting of her surroundings complimenting her burgundy, brown make up palette, while her dark red/black painted nailbeds sit at her fingertips as she effortlessly holds her cigarette is so striking and perfectly set up.

Audrey Hepburn in Roman Holiday and Breakfast at Tiffany’s

Another film I recently watched was Roman Holiday starring Audrey Hepburn, and just like all of the films I have mentioned in this post, it captivated me to no end. The scenic locations used for the film made me ache with jealousy purely because I wasn’t there. One of my biggest desires is to travel and Rome is up there on top of my list. I have already visited Italy back in 2014; I stayed in Venice and it is my favourite place I have visited to this date – I am almost dying to get back to Italy and this film did not help that!

But despite the iconically beautiful scenery, it was most definitely the protagonist that striked me the most. This didn’t come as a surprise as I was already a huge Hepburn fan prior to viewing Roman Holiday. I watched a documentary about what made her a style icon and it stated:

“Edith (the costume designer) had her put in the cute little blouse and the flared skirt… well she threw on the little scarf and the belt; she was really good at accessorising.”

The styling of the neck scarf is one of my favourite things about her Roman Holiday get-up. It essentially completes the outfit, and the fact that she added this herself makes me admire her even more.

The first film I saw starring Hepburn was basically accidental. It was a rainy Sunday afternoon and I turned on the television and the remote wasn’t working and it so happened that the channel was showing Breakfast at Tiffany’s. I had heard my father speak highly of it so I thought I might as well give it a go (that and I couldn’t be bothered to manually turn it over…)

My Sunday afternoon was soon made a pleasurable one. I was completely infatuated with Hepburn’s calm composure while sporting these incredible outfits. Her charming smile combined with the twinkle of her ‘out there’ jewellery choices against the classic black dress… no one can do it like Hepburn does.

Ironically, towards the end of the film she is lounging around in some black high waisted trousers and a beige jumper with her hair loosely styled in bunches. She agrees to go out to dinner, but states “anywhere that will let me in looking like this.” But this happens to be my favourite outfit of the film. Her ‘boyish’ petite stature results in only one word for it – class. And it’s safe to say she had class running through her veins. Accompanied with ‘Moon River’ on the soundtrack, here you have the whole package when it comes to a classic cinematic triumph.

I could have picked so many looks and themes to ramble on about but I think that’s about time to wrap it up! I actually wrote a list of all of the ones I wanted to write about and it was so difficult to select just a few. I hope you’ve enjoyed reading into my favourite film aesthetics.

View all posts by lucyedser